Learn pull-ups and chin-ups - this is how you can do it quickly and effectively! 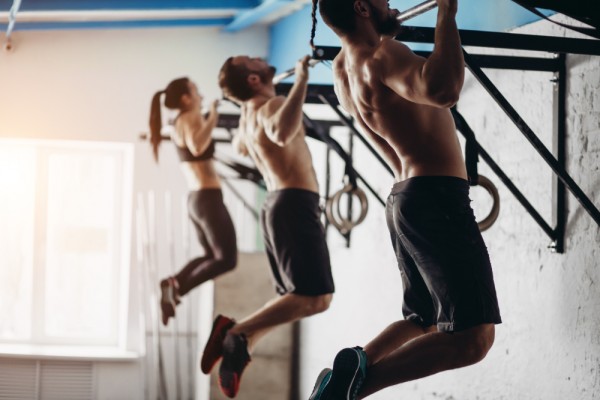 Many who have discovered strength training for themselves pursue the goal of learning a proper pull-up. Pull-ups are a great challenge for women in particular, as they are proportionately much weaker in the upper body than men due to their anatomy. But men also have a deficit in this basic exercise more often than they realize: often the range of motion is shortened, so that although some repetitions are performed, these cannot be classified as full pull-ups. In this article, we will discuss a correct execution of the movement, the muscle groups involved and the right methods to learn pull-ups.

In order not to make the explanation too complex, we’ll talk about a chin-up with a shoulder-width neutral grip. This is also - normally - the strongest grip and therefore the easiest to learn. Other grip variations will be discussed in the next section but one. A correct pull-up begins with the arms fully extended. The pulling movement is performed by the muscles in the upper back between the shoulder blades and the arm flexor muscles. Another section is more specific about the muscles involved in the pull-up. The elbows are pulled back and the aim is to touch the top of the pull-up bar with the shoulder so that the chin goes over the bar in the uppermost position. Only in this way can one speak of performing a full range of motion during the pull-up.

In addition, the hips should remain straight, which is achieved either by keeping the legs fully extended the entire way or by bending the knees backwards. However, the knees should not be pulled forward at all.

After pulling up, lower yourself in a controlled manner until you are fully extended (unhooked) and then start another repetition if necessary:

Which muscles are trained during the chin-up?

Depending on the chin-up variation (grip width, grip variation, execution, etc.), the muscle type involved shifts a little. Basically, however, you can name certain main muscles that are active during the chin-up. Again, we assume a shoulder-width and neutral grip.

The latissimus dorsi muscle (large lateral back muscle) and the arm flexor muscles (brachialis and brachioradialis) are primarily active in this classic chin-up. The “teres major”, a smaller muscle that attaches to the back of the shoulder blade and is connected to the humerus, also has an important role in the chin-up. Among other things, it supports the latissimus dorsi muscle and the arms during the pulling movement in the chin-up.

The pectoralis major (large chest muscle), the abdominal muscles, the shoulders (deltoids) and the rhomboids (inside the shoulder blade) serve as secondary support muscles during the chin-up. So it is clear that pull-ups and chin-ups require a very high total recruitment of large and small muscle groups. This makes the exercise extremely demanding on the one hand, but also one of the most effective exercises for the upper body, which is why it is often referred to as the "king of upper body exercises". Since chin-ups require you to pull up your entire body weight, they already require well-developed basic strength (including a strong back) and a lot of body tension. In addition, the nervous system is strongly challenged, which is why performance usually drops sharply after an "all out" set.

What are the different pull-up variations?

There are many versions of the chin-up. There is fundamentally neither a wrong nor a better variation, because as with the squat, they all have their justification. It is only important to always know why you are currently using which one and to understand its biomechanics, muscle recruitment and energy system.

Pull-ups usually refer to a pronated grip (overhand grip). Pronated chin-ups can be held in different widths. The wider the grip, the more isolated the latissimus dorsi has to work, which makes the exercise even more advanced, as the arm muscles and other stabilizers only provide support to a very limited extent.

The supinated grip (underhand grip) and the neutral grip belong to the chin-ups because here the chin can go the furthest over the bar. The muscles involved in the neutral grip have already been described. In the underhand grip variation, where the palms of the hands face you, the biceps brachii are used more. A higher proportion of the arm flexor muscles are active.

The above-mentioned variations belong to the basics of the chin-up bar, but there is an enormous range of other methods and variations for performing chin-ups.

As already mentioned, it is a great challenge, especially for women, to manage a chin-up in the full range of motion. This is because the female sex has a relatively weaker upper body, which is hard to miss visually: narrower shoulders and back and less developed back and arm flexor muscles. However, there are also many men who pursue this goal and have difficulties with it. Limiting factors include too much body fat in relative terms, as this is inactive extra weight. Reducing body fat can therefore also play a part on the way to the first chin-up.

Individual anatomy and physiology also play a role. For example, very long arms can make it more difficult. Since the nervous system is crucial in such a global exercise, this is also a factor to consider.  Even with all these challenges, the goal is still achievable - even if the duration of the progression can take up to more than a year.

Three steps to your first chin-up

The chin-up machine in gyms or the chin-up with a band are not recommended in most cases. These two options very rarely lead to the goal. It is much more promising to make the eccentric movement very strong. Specifically, this means negative chin-ups. The following progression can be integrated into the training plan. Each step can be trained for three to four weeks. Some also need to be repeated.

In addition, the right additional exercises must be chosen to support the chin-up training. To do this, the muscle groups involved above must be strengthened with targeted slow controlled eccentric and almost concentric movements. Different variations of biceps curls, especially those with an overhand grip (pronated) as well as specific exercises for the latissimus dorsi and the “teres major” are useful.

1. 5-30s Isometric Chin Up Lower/Hold - Supinated Grip at the top of the bar with an underhand grip (supinated shoulder-width):

If 10-15% of your bodyweight can be released as additional weight for 30 seconds slowly and in a controlled manner at a steady pace, the first bodyweight chin-up should be able to be pulled up. If this is not yet the case, it makes sense for a person to give some assistance with the pull-up, if this is done for a few training sessions, the nervous system will then also be ready:

By the way: You can also learn chin-ups while doing outdoor sports and improve your chin-up - just find a playground with a climbing frame, a sturdy clothes pole or the nearest outdoor gym - and you're ready to go! Good luck with your first chin-up!

In the following article you will find a more detailed example programme for chin-up progressions!

How can I learn and train chin-ups as quickly as possible?
To learn a first chin-up, eccentric training is the most effective: climb up to the bar and lower yourself into extension in a negative movement for 30 seconds (you will probably only manage 10 seconds at first). If this is possible, do the negative chin-up with additional weight. If you can do 30 seconds with an additional weight of 10-15% of your body weight, you should be able to do the first chin-up.
How many chin-ups are optimal for beginners?
Since beginners usually can't do clean chin-ups at all, they should first strengthen the upper back on the lat pull-down and in the next phase do one repetition of a negative pull-up in 30s per set. If you can only do 1-3 chin-ups, you should focus on more sets: For example, 5 sets of 1-2 reps alternating with bench press 5 sets of 6-8 reps. The focus should be on the eccentric movement, for example 1 second pull up and 4s controlled release. If the eccentric movement is exhausted, this has a positive effect on concentric strength. It is best to train chin-ups in a superset with a counterpart exercise such as the bench press in order not to overload the affected muscles and nerve cords.
Why do I always fail at chin-up training?
A chin-up is an extremely global exercise that requires many different muscle groups and puts a lot of strain on the nervous system. This is why you get tired quickly with this exercise, so you should divide your strength and not go all out in the first set. Other limiting factors are grip strength, choice of grip and the speed of the exercise as well as the choice of additional or parallel exercises. You should start with a shoulder-width neutral grip, as this is the strongest variation. The forearm strength can be strengthened well with pronated EZ curls and the focus should be on slow eccentric and fast concentric movements.
How do you do more chin-ups immediately?
Instead of trying to increase the number of repetitions in every workout, it is better to do chin-ups in the low repetition range with additional weight. Increasing additional weight also affects the possible number of repetitions and is much more efficient. It should also be determined what the limiting factor is: if the arm flexor is the weaker limb, curl variations can help as additional exercises; if it is mainly the upper part of the chin-up, then the upper back can be strengthened specifically. Specific methods can also be helpful, for example holding the upper position for 3s or very slow eccentric movements or 1 ¼ repetitions.
Which grip for which type of muscles is optimal when doing chin-ups?
The easiest to learn is the shoulder-width neutral grip, also known as Chin Up. This form recruits the most muscle fibres and can be performed well through the full range of motion without limiting shoulder girdle mobility. It is also the strongest grip and although the wide pronated grip exercises the latissimus dorsi muscle (upper back) in a more isolated manner, both grips require an equal amount of recruitment of this muscle in absolute terms. However, at advanced levels it is very important to keep varying the grips. There is no right and wrong, it's about awareness of what you use and when. The supinated grip (underhand grip) requires more arm flexion muscles, so this variation makes sense in an arm workout.
Why is body tension and posture so important for proper chin-ups?
As chin-ups are a very global exercise, all muscles involved must be used to the maximum. Good body tension promotes the activation of all the main and auxiliary muscles, which on the one hand makes you a little stronger, but on the other hand also promotes correct execution. This helps to avoid performing the exercise in an incorrect posture, which could cause pain and force stagnation.
Which muscle groups are trained during the wide grip chin-up?
In the wide pronated grip (overhand grip), the latissimus dorsi in particular has to work in a more isolated way, which makes the exercise even more advanced, as the arm muscles and other stabilisers only provide support to a very limited extent. Nevertheless, even with the wide grip, the teres major (small muscle that attaches to the back of the shoulder blade and is connected to the humerus) and the brachialis and brachioradialis muscles (arm flexors) as well as the pectoralis major (large chest muscle), the abdominal muscles, the shoulders (deltoids) and the rhomboids (inside the shoulder blade) take on a supporting function.
Write a comment