Histamine - what exactly is it and what causes it in our body? 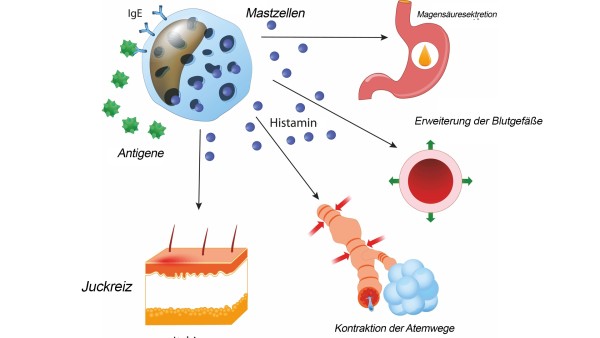 With histamine intolerance, strawberries, cheese, red wine, pulses, tomatoes, tuna, avocado and many other foods are obviously a no-no. But what exactly is histamine, and what does it do in the body? Do you really have to follow such a strict diet if you have an intolerance, or are there other options such as tablets or holistic therapies that address the cause of the problem?

Histamine is a substance that can be produced by human, animal, and plant organisms. It is a so-called natural substance, which means that it fulfils a biological function and can be formed by the organism itself. In the human metabolism, histamine has many tasks: It acts as a tissue hormone, neurotransmitter, plays an important role in allergic reactions and supports the immune system in its defence against foreign substances1.

Histamine (as well as a few other messenger substances) gives the signal for inflammatory reactions in the human organism, so to speak, which triggers a swelling of the tissue. This activates the immune system and brings in many little helpers to fight off foreign (and potentially dangerous) substances. It is therefore a significant messenger substance that supports the body's own immune defence. However, it can happen that histamine becomes overactive and passes on the signals for inflammatory reactions at the slightest contact with foreign substances, even though there is no danger at all. If histamine itself is then additionally absorbed through food, total chaos ensues - more on this in the next section.

When do we speak of a histamine allergy or intolerance?

In fact, the word "histamine allergy" is often used incorrectly in this context. Strictly speaking, it is a histamine intolerance. An allergy is an immune reaction to foreign substances that are not actually infectious.

An allergy is the body's immune reaction to non-infectious foreign substances (antigens or allergens). In this case, the body mistakenly forms antibodies to the respective foreign substances, as it does with viral infections, except that these are actually harmless substances. Symptoms of an allergy are, for example, asthma, neurodermatitis, swollen eyes, diarrhoea, nausea, fever, sleep disorders and, in the worst case, anaphylactic shock2.

In intolerance, the body reacts to a certain substance (which is normally absorbed through food) with an intolerance reaction, but no antibodies are produced by the immune system. This is usually caused by the lack of enzymes that are there to break down the substance in question3.

A typical example is lactose intolerance, in which the enzyme lactase, which should break down lactose, is missing in the intestinal tract. This causes abdominal pain and diarrhoea, but also many other chain reactions that trigger inflammatory processes inside the body.

It is similar with histamine intolerance: there is usually not enough diamine oxidase in the intestine. This enzyme breaks down histamine, which is absorbed through food.

Histamine formation and the human metabolism

The tissue hormone is formed by the human organism from the amino acid histidine.

With the help of the enzyme histidine decarboxylase (HDC), histidine is converted into histamine1. This happens in the immune cells (mast cells, platelets), the cells of the skin and mucous membranes (stomach, intestine) as well as in the nerve cells.

The micronutrients zinc, copper and vitamin B6 also play a role. The histamine formed is stored in small vesicles, preferably in the mast cells, and released when stimulated. Stimulation refers to pathogens, allergens and toxins, but also psychological stimuli such as stress (cortisol release), which are absorbed by the body4.

In addition to the body's own production of histamine, we can also absorb the substance through food. It is found in numerous foods, especially in longer-aged foods such as cheese, alcohol, sauerkraut, but also in certain fruits and many other foods. More on this below. In principle, this is not a problem because the body is able to break down histamine with the help of two specific enzymes. If this breakdown does not work, the histamine concentrations in the body remain high and falsely lead to the reactions that should actually only be triggered when a foreign substance has to be eliminated by the immune system. This is commonly referred to as histamine intolerance.

Histamine degradation and its disorders

Diamine oxidase is the enzyme that breaks down histamine in the intestine (thus primarily ingested via food). If there is a disorder in the formation of this enzyme, histamine intolerance1 occurs.

If DAO is missing in the intestine, the ingested histamine is not broken down during digestion and wrongly leads to the inflammatory reactions described above, the typical symptoms of which follow in the next section. It is important to know that diamine oxidase needs B6, vitamin C and copper; if these micronutrients are missing, this can be a contributory cause of histamine intolerance.

The second enzyme responsible for histamine degradation is produced in the liver: Histamine n-methyl transferase is formed from the amino acid methionine and the energy carrier ATP. There can also be a disorder here, but usually the liver is more affected. Heavy metal pollution, too much sugar, fat, stress, but also a micronutrient deficiency and too little available methionine can also promote a reduced histamine breakdown here.

What are typical symptoms of a histamine intolerance?

A typical symptom of histamine intolerance is a skin rash and mainly appears on the face, décolleté, neck, but also on the arms and sometimes on the stomach. It involves larger, noticeably reddened patches on the skin. The eyelids are also affected, they swell up additionally and the eyes can also be reddened. Often the skin is also very itchy. You should be cautious with this type of skin and not put any irritating creams on it. Aloe vera and coconut oil can alleviate the symptoms somewhat.

These are THE histamine foods

There are foods that contain histamine and cause symptoms in histamine intolerance due to a deficiency of diamine oxidase in the intestine.

This is because the histamine cannot be broken down and then leads to false inflammatory signals in the organism (see above in the text). Histamine-containing foods therefore have a direct effect. So-called histamine inhibitors have an indirect effect. These include some substances that are formed from amino acids. They also make use of the enzyme diamine oxidase, which (simply explained) is why there is not enough of it to break down histamine. Many foods contain both substances, which can lead to DAO deficiency. In addition, there are foods that promote the body's own histamine formation, although they do not contain any themselves. They are called histamine releasers. This is also an indirect process.

The following foods can be problematic for people with histamine intolerance in direct and indirect ways:

In addition, it can be said that histamine is quickly formed in foods that are no longer completely fresh. The fresher the food, the more tolerable it is for people with histamine intolerance.

Is it possible to accelerate the breakdown of histamine?

As already mentioned, the enzyme diamine oxidase needs vitamin B6, vitamin C and copper. If these micronutrients are the cause of the enzyme deficiency, histamine degradation can be accelerated by eating foods that contain these substances in good bioavailability. Vitamin C is especially helpful. Cabbage contains a lot of it. Of course, the degradation can also be accelerated with a medicine that contains DAO.

However, it would be more important to look for the cause. Often this is due to an intact intestine (leaky gut), a strain on the liver and intestine from medicines and toxins, a micronutrient deficiency, stress and too many putrefactive bacteria in the intestinal flora.

What do anti-histamine pills really do?

(Anti) Histamine pills often contain the enzyme diamine oxidase, which can help break down histamine. They often help, but should not be seen as a long-term solution. The main problem is that they usually - like almost every medicine - contain substances (lactose, industrial additives, etc.) that put additional strain on the intestines and liver.

This would then only further the cause of the problem. Basically, it is best to consider a detailed consultation with a holistic medical practitioner and possibly follow a temporary strict diet in which the histamine foods are completely avoided.

Histamine is a substance that actually sends important signals in the immune system when the body comes into contact with external toxins or pathogens. Histamine is also found in food, which is why the enzyme diamine oxidase, produced in the intestine, plays an important role in breaking down histamine. If the enzyme is not sufficiently present, histamine intolerance occurs, which can lead to numerous unpleasant symptoms. The cause, which often lies in an unhealthy intestine and an overloaded liver as well as a micronutrient deficiency, should be determined and treated.

What is histamine or what are histamines?
Histamine is a substance that can be produced by human, animal, and plant organisms. IUPAC is the chemical name for histamine. Histamine acts as a tissue hormone, neurotransmitter, assumes an important role in allergic reactions and supports the immune system in its defence against foreign substances.
What does histamine do in the body?
Histamine (as well as a few other messenger substances) gives the signal for inflammatory reactions in the human organism, so to speak, which triggers swelling of the tissue. This activates the immune system and brings in many little helpers to fight off foreign (and potentially dangerous) substances. It is therefore an important messenger substance that supports the body's own immune defences.
Which foods contain histamine?
almonds, coffee, chocolate, garlic, honey, peppers, tomatoes, spinach, sauerkraut, and other fermented foods.
What is a histamine allergy?
Histamine intolerance (it is not called allergy) is a physical reaction in which many complaints/symptoms appear when histamine-containing foods or those that stimulate the body's own histamine production are eaten. This is usually caused by the absence of the histamine-degrading enzyme in the intestine.
How can I break down histamine?
There is an enzyme, diamine oxidase, which breaks down histamine. Vitamin C, vitamin B6 and copper are involved in the formation of the enzyme. So it can be helpful to build up enough of these micronutrients through a good diet. However, if there is already a disturbance in the formation of histamine, you should first eat a low-histamine diet.
Write a comment