Neurotransmitters: the pulse generators of our brain

Written by Ines Schulz on 28 Apr 2020
Neurotransmitters - similar to hormones - trigger signals in our system. The transmission is based on electrical impulses. These ultimately control, directly or indirectly, our mood, well-being and feelings, performance, motivation and regeneration. Thus they have a great influence on our metabolic processes and the nervous system, which is ultimately relevant for our health. 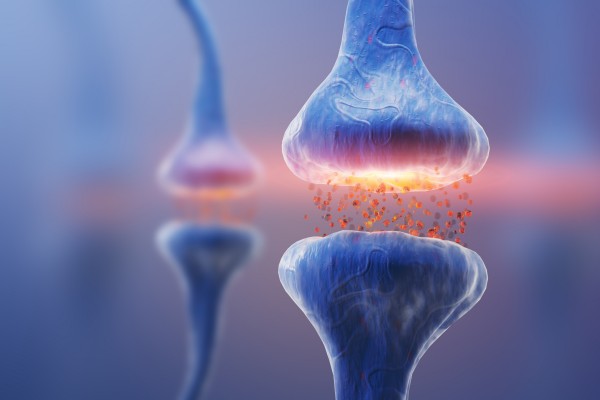 Neurotransmitters – similar to hormones - trigger signals in our system. The transmission is based on electrical impulses. These ultimately control, directly or indirectly, our mood, well-being and feelings, performance, motivation and regeneration. Thus they have a great influence on our metabolic processes and the nervous system, which is ultimately relevant for our health.

What neurotransmitters exactly are and how they are formed

Since there are more than 60 different neurotransmitters, and many of them are also active as hormones, only four of them are discussed here. The focus is on the messenger substances that can be used to provide a practical insight into how we can influence their activity through our lifestyle.

From these four examples it is easy to see that, although the release of messenger substances can be abstract from a biochemical perspective, it is nevertheless easy to draw conclusions with practical relevance. For example, it is obvious that the neurotransmitters have to transmit their signals at the right time and in the right dosage. This is a balancing act for the organism. For example, the body must have the right nutrients available for this. The last part of this article will deal with this point in more detail.

What exactly are neurotransmitters?

Neurotransmitters are chemical messengers that transmit electrical stimuli from one nerve cell to another or to the other cells. They often involve reflexes and rapid reactions. They can also amplify or alter already generated stimuli1. There are many of these substances, all with different effects. The subject matter is very complex, so some neurotransmitters do not necessarily always produce the same effect. Depending on the combination and where the transmission takes place, the effect may vary.

Furthermore, the biochemical compounds may have different mechanisms, some inhibit processes and some promote them.

Many neurotransmitters are also active as hormones. They lead a double life, so to speak. However, there are crucial differences between the two signal carriers: As already explained, neurotransmitters give off signals that cause immediate reflexes and reactions, hormones often provide the answer to these stimuli. For example, when we get scared, the escape reflex is often triggered, the signal for this is transmitted by norepinephrine. The hormonal response to this would then be, among other things, that the blood sugar levels shoot up in order to quickly supply our body with sufficient energy. The signal for the transport of sugar from the cell into the bloodstream is controlled by hormones1. More information about blood sugar and its hormonal processes will follow in the next article.

The central nervous system, abbreviated CNS, consists of the brain and the spinal cord. It is contrasted with the peripheral nervous system, or PNS for short, which comprises the nerves that connect the CNS to the organs. The brain is the superordinate centre for the entire nervous system2.

In biology and medicine, a distinction is also made between the involuntary and voluntary nervous system. Arbitrary activities whose transmission of stimuli we can consciously control are, for example, movements of the skeletal muscles or movements of our sensory organs. For example, how we control where we look with our eyes. Involuntarily, our nervous system together with the hormonal system controls the activities of the internal organs. Thus, when we talk about neurotransmitters, we find ourselves in the involuntarily controlled nervous system2.

How are neurotransmitters formed?

Neurotransmitters are mainly formed from amino acids. These are the small components of proteins. So proteins are formed from chains of amino acids and split up the other way round because they have innumerable functions in our metabolism. This is relevant at this point because it can be concluded that our body must have the right building blocks of proteins available in order to be able to form the messenger substances from them3.

The balance of neurotransmitters and our nervous system is important

How can you optimize your neurotransmitter release and keep the system in balance?

At least a part of the messenger releases can be influenced by the appropriate diet. Thus it makes sense to consume protein in the morning that contains the amino acids that promote dopamine and acetylcholine, so that one starts the day fit and motivated. Red meat and nuts are a good choice here. Read more in the article "The perfect breakfast". In the evening or on quiet days, when the body needs to switch to the sympathetic nervous system, foods that boost the production of GABA and serotonin are beneficial. Carbohydrates, for example, ensure that serotonin is released by the subsequent increase in insulin, which leads to relaxation and well-being. This will ultimately have a positive effect on sleep. Of course, dealing with stressors is also important, because although neurotransmitters can promote emotions, conversely emotions can also promote the release of messenger substances. A balanced mindset is therefore very important in addition to a health-promoting lifestyle.

What are neurotransmitters?
Neurotransmitters are chemical messengers that transmit electrical stimuli from one nerve cell to another or to the other cells. They often involve reflexes and rapid reactions. They can also amplify or change already generated stimuli. There are many of these substances, all with different effects. Neurotransmitters determine our mood, well-being, regeneration and activity and vice versa.
What exactly is dopamine?
Dopamine promotes blood circulation and increases motivation, inner drive, emotion, learning and memory. The neurotransmitter is formed from the amino acids phenylalanine and tyrosine. Vitamin C, copper and iron also play a role in dopamine metabolism. Dopamine is one of the substances that promote feelings of happiness and optimise our performance. Dopamine deficiency can cause depression and make us lethargic and listless.
What is acetylcholine and how does it work?
Acetylcholine is a neurotransmitter that is active as a concentration promoter. It is formed by an additional conversion step from the amino acids glycine and serine. Acetylcholine promotes cognitive processes and is important for learning processes. This acetylcholine is needed for our brain to perform properly. Alzheimer patients lack this messenger substance, which is a factor in their forgetfulness.
What is serotonin, where does it work in the human brain?
Serotonin is one of the happiness carriers. The neurotransmitter is synthesized from the amino acid tryptophan. Serotonin transmits signals that support us in regeneration phases. Thus, a release of serotonin ensures calmness, inner peace, contentment and relaxation. But the messenger substance can do much more: it regulates eating behaviour, pain sensation and hormone release. For example, serotonin promotes the release of melatonin, our sleep hormone. It is therefore a sleep promoter and can also reduce aggression, anxiety and depression. A serotonin deficiency can lead to sleep disorders, depression, neuroses, exhaustion and anxiety.
What is GABA and how does it work?
GABA stands for gamma amino butyric acid and is the most important neurotransmitter with inhibitory effect in the central nervous system. The messenger substance is formed from the amino acid glutamine. In the foetus in the womb it plays an important role in the establishment of nerve connections. In the pancreas, GABA inhibits the secretion of hormones such as glucagon. Glucagon is an opponent of insulin and ensures that sugar is transported from the cells into the blood so that enough sugar remains in the bloodstream. Gamma aminobutyric acid mainly inhibits hormones and signals that put our body in a state of stress. Ultimately, it is therefore crucial for regeneration and relaxation. Nervous people, who often do not come to rest in the evening, can have a deficiency of GABA.
brain
Write a comment