Does sport make you happy? Endorphins & hormones during & after sports under the spotlight 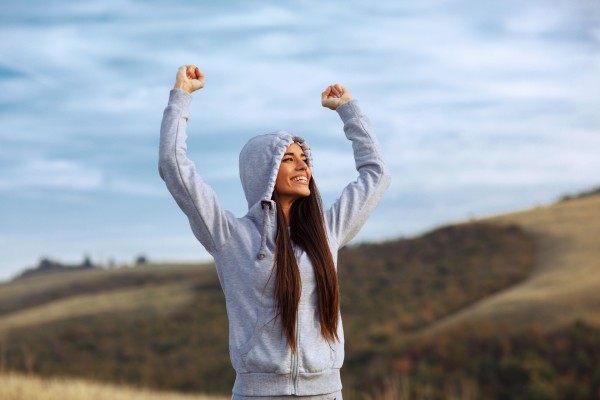 Sport releases endorphins and makes you happy: Endorphins are among the so-called happiness hormones. They belong to the body's own substances that transmit signals to the brain that can trigger well-being, positive feelings, joy and other emotions. However, there are many other neurotransmitters and hormones that belong to the happiness hormones and are also released in connection with sport. So, sport really does make you happy - why and how this works physiologically is explained in more detail in this article.

Sports make us happy - but why is that?

It is very crucial for overall physiological and mental health that the two systems are in balance. Unfortunately, this is often not the case nowadays:

Lack of exercise, poor diet and an unhealthy stressful lifestyle cause hormones to accumulate that cannot be released. Internally, there is then permanent stress and too many stress hormones are released in proportion, which are no longer balanced out by relaxation hormones and endorphins.

Dopamine and serotonin are two examples of neurotransmitters/hormones that many people under constant stress suffer from a lack of. More on these two signals follows below. Ultimately, what is important is that the imbalance described makes for tension and moments of ease, relaxation, and feelings of happiness become rare. Sport can possibly promote endorphins and very definitely other relaxation and happiness hormones.

These sports endorphins will push you forward!

Endorphins, along with serotonin and dopamine, are a separate type of happiness hormone, but like the former they also belong to the so-called peptide hormones, which are formed from amino acids and are therefore also formed from them. This means that it is first significant that the body has enough raw materials - i.e. amino acids - to be able to produce the respective happiness hormones at all. In addition, the right circumstances must be created so that the production or release then happens. The first prerequisite is a sufficiently high-protein intake because proteins are broken down into their building blocks, the amino acids, and then used in the organism. 1.5-3g protein per kg body weight is (depending on the goal, genetics, and circumstances) what the body needs daily in protein. So, if enough raw material is available, it's now a matter of the right circumstances, which brings us back to the question "Why does sport make us happy?":

During more intensive sports sessions, various hormones are released in larger quantities. These ensure, for example, in strength training or during a longer run, that if you are tired at the beginning, you even get a hype feeling all of a sudden and after a while you are much more motivated than at the beginning. So-called sports endorphins could be the cause of this. However, since the subject of hormones is very complex, there is disagreement whether endorphins are actually responsible for this during sport. In fact, a group of the body's own pain suppressors, the morphines, could also be causative for the feelings of happiness during sport. The relationship between sport and endorphins has not yet been sufficiently researched, according to some sources (1).

Other scientists are certain that endorphins play an important role in connection with sport.

Dopamine release via sport & after exercise

In contrast to the sports endorphins topic, the hormone or neurotransmitter dopamine has been more clearly researched in connection with sports: dopamine is a signal produced naturally in the body that stands for motivation, concentration and activity. During sport, dopamine is released - higher concentrations of the substance are measured after 20 minutes at the latest. This leads to being motivated and feeling good. It is important to know that during sport (as in all other moments) an enormous number of hormones and signals act together in the body. It is impossible to list all the hormones that are released during sport here, partly because we do not yet know everything about their complexity. However, a little more will be explained below. As with sports endorphins, a lot of research is still being done in this area. What is clear, however, is that the many signals in the body must be in harmony and all of them must have regular active times as well as rest periods so that the body is in balance. However, it has been clearly proven that sport makes people happy by releasing a wide variety of happiness hormones.

Serotonin release due to sport & afterwards

A lot also happens after sport in terms of hormone release: serotonin is a signal that ensures relaxation and well-being and has a positive influence on sleep, belongs to the parasympathetic nervous system. It supports our regeneration and is one of the relaxing happiness hormones. We can feel happiness and joy during activity and also at rest. If there is a resting phase after exercise, in which in numerous instances supporting nutrients are also useful, then the optimal circumstances for a serotonin release are given: Carbohydrates and certain proteins are the building blocks for the neurotransmitter and a physically calm state are the right conditions. Then serotonin and other relaxation hormones are released. So, sport also makes us happy after sport, and it makes us fall asleep better.

By the way: muscle building happens during the regeneration period - that is, when we are in the parasympathetic nervous system and release serotonin, for example. During sport, the muscles are only irritated or slightly destroyed so that they have a reason to grow together again afterwards. That is why sleep and sufficient regeneration are essential for sporting and health goals. Whether endorphins or morphines are released during sport is irrelevant because it's all about the big picture.

These sports hormones are released & that's what they're good for

In addition to the happiness hormones dopamine and serotonin and possibly the endorphins in sport, the messenger substances adrenaline and noradrenaline also play a role in physical performance. Sex hormones such as testosterone and stress hormones such as cortisol should also be mentioned in connection with sport. Many different hormones constantly interact and regulate our anabolic and catabolic metabolism. Finally, it is primarily important that - whether sport endorphins, sex hormones, stress hormones, relaxation hormones or growth hormones - the hormones are in balance. When this is the case, our parasympathetic and sympathetic systems are also in balance. This enables us to regularly release happiness hormones, to perform under motivation, and also to be able to rest. The hormones after sport and the hormones during sport support the balance of the two systems to a great extent.

A lack of exercise, but also an excess of sport, can upset this balance. Too long sports sessions are usually counterproductive for the release of the happiness hormones - be it endorphins in sports or dopamine.

There are many different happiness hormones that belong to both the parasympathetic and sympathetic nervous systems. Whether endorphins are released during sport is debatable, but definitely many of the happiness hormones like dopamine are active during exercise. After sport, relaxing happiness hormones are produced, one of which is serotonin. They ensure that the body can come out of a constant state of stress.

For all happiness hormones and other messenger substances, the right circumstances (fight vs. rest) and raw materials such as amino acids, good fats and to some extent carbohydrates are of great importance.

Why does sport make people happy?
Sport releases endorphins and other hormones that belong to the so-called happiness hormones. These belong to the body's own substances that transmit signals to the brain, which can trigger a sense of well-being, positive feelings, joy and other emotions. Sport also promotes good sleep, which also leads to greater well-being and hormone balance.
What hormones are released during sport?
Dopamine, cortisol, acetylcholine, adrenaline, noradrenaline, endorphins, testosterone and some other hormones are more active during exercise. After the training session, more relaxing happiness hormones such as serotonin are released.
What are endorphins?
Endorphins are, besides the examples of serotonin and dopamine, a separate type of happiness hormone, but like the former they also belong to the so-called peptide hormones, which are formed from amino acids and are therefore also formed from them. Some scientists are certain that endorphins play an important role in connection with sport.
Why is sport so important for the household of happiness hormones?
Intensive sports sessions ensure hormone balance: the parasympathetic and sympathetic nervous systems are brought into harmony because during sports more stress and happiness hormones are released, and after sports more relaxation and happiness hormones.
Why is sport also healthy for the mind?
Because the mind, or psyche, is always directly related to physiological circumstances: if we are mentally stressed, we release stress hormones; if we are relaxed, we release happiness and relaxation hormones. Since sport leads to increased release of the happiness hormones, distracts us - at least for a short time - from stressful thoughts, and contributes to improved concentration, the hormones are brought into balance, and we also feel good spiritually.
What should you eat before exercise to increase your happiness hormones?
Good fats and protein with a good amino acid profile: L-tyrosine, for example, promotes focus and, in general, the happiness hormones need many amino acids to be formed. It is also best to drink amino acids during training.
What is the so-called Runner's High?
A kind of intoxication during sport, primarily running, which sets in after about an hour. This is due to the happiness hormones and possibly also morphines that are released by the body - virtually a release of the body's own drugs.
Write a comment