The perfect breakfast: Why muesli is not the best start into your day 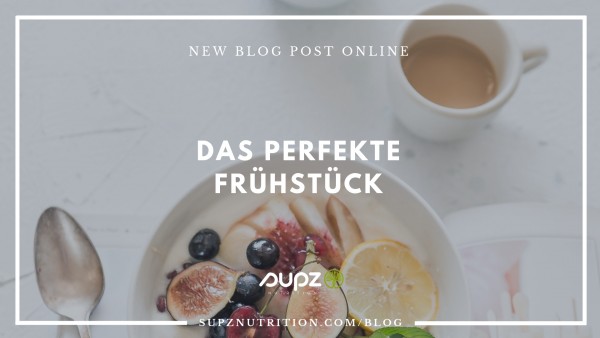 “The first thing you put in the mouth in the morning – provided it’s food – will dictate all your transmitters for the whole day” – Charles R. Poliquin

With these words C.Poliquin - one of the most successful strength coaches of his time - points out that the form of the energy suppliers taken at breakfast has a great influence on the physical and mental condition. What must a healthy breakfast include?

Why protein for breakfast?
A good source of protein with high bioavailability causes the production and release of dopamine, since it contains, among other things, the amino acid L-tyrosine, from which dopamine is ultimately formed. This messenger substance has a stimulating effect on concentration and blood circulation in the kidneys and raises the mood3. Chicken breast, salmon, whole eggs, pumpkin seeds and walnuts contain particularly high levels of L-tyrosine4.

The advantage of healthy fats
The second macronutrient at breakfast should be a high-quality source of fat, because natural fats supply the brain directly with energy and are not transported to the fat storage tanks, as long as they are not consumed in combination with carbohydrates. Various fats are essential in the human organism: in contrast to sugars, they cannot be converted from broken down proteins. On the other hand, many vitamins are fat-soluble and can only be absorbed from food in combination with fatty acids1. All naturally occurring fats are important, whether saturated or unsaturated, Omega3 or Omega6. Recommended fats include virgin coconut oil, olive oil, butter from grass-fed cattle, fish oil, ghee, cocoa butter, nuts & seeds or pumpkin seed oil. More important is the ratio of one type of fat to another.

These fats should be avoided
In contrast to the still widespread myth that saturated fatty acids have a negative effect on cholesterol levels, the current state of science says the opposite. However, regular consumption of hardened vegetable fats has been shown to cause oxidative stress, which ultimately leads to the formation of plaques (spotty, inflammatory changes in blood vessels)2.

Liquid vegetable oils are modified in their natural molecular structure by binding to additional hydrogen atoms in such a way that hardened fats such as margarine are formed. Like temperature-sensitive fats that have been heated too high, this belongs to the so-called trans fats. They can be found, among other things, in finished products, chips and croissants, which, like margarine, should be avoided.Mikronährstoffe und Ballaststoffe sind wichtig!

The last two components of the perfect breakfast are sufficient fiber and micronutrients such as vitamins and minerals. On the one hand, the dietary fibres ensure a feeling of satiety. On the other hand, they nourish the probiotic intestinal bacteria, which produce vitamins and support the immune system by eliminating harmful bacteria, rubbing the intestinal mucosa and thus keeping it intact.

In addition, more short-chain fatty acids are formed, which means that fewer putrefactive bacteria are formed, which cause ammonia to be produced. This would otherwise have to be transported via the blood and broken down by the liver5. Vegetables in particular contain a lot of fibre, as well as vitamins, antioxidants and trace elements. They are little helpers for the immune system and many metabolic processes, without which the body cannot keep itself healthy6.

Fruits, however, with the exception of berries, are not recommended for breakfast, despite their vitamin and fibre content; they are carbohydrates because they contain large amounts of sugar, which should be avoided in the morning. This brings us to the next point:

Why a low carb breakfast? Carbohydrates in the morning have a great influence on blood sugar. So if bread rolls, oatmeal and co. as well as fruits with a high sugar content are taken as the first meal, blood sugar rises rapidly, because even complex carbohydrates are ultimately converted into sugar. Since the body cannot use everything immediately as energy, the high blood sugar level causes the pancreas to produce a lot of the hormone insulin and release it into the blood.

Do you need carbohydrates for breakfast?
The grease reservoirs have an almost unlimited capacity. In the worst case scenario, sugar is consumed with fat. In this case, the insulin increased by the sugar gives the body storage-enhancing signals, which leads to the sugar and fat being stored as fat in the cells1. If, on the other hand, only fat with protein is consumed, this has such a minimal effect on blood sugar that it hardly increases at all and the pancreas only releases very small amounts of insulin7.

A further factor to be considered in this context is the release of serotonin, the happiness hormone that ensures relaxation and well-being and correlates with the sleep hormone melatonin. Serotonin regulates insulin, among other things. Thus it is released when insulin is released8. Ultimately, this also leads to a feeling of relaxation and sometimes to fatigue. For this very reason it makes more sense to include carbohydrates in the evening in the diet.

Vegan breakfast alternatives
A healthy breakfast without carbohydrates, which takes into account all the components that ensure an energy-rich start to the day, could be a piece of meat or eggs fried in butter from the grazing cattle with some vegetables or berries. Even vegans can easily put together the Low Carb Paleo breakfast. Unsweetened vegetable milk made from cashew nuts, coconut or almonds with fresh berries and seeds, seeds and nuts roasted in coconut oil offers a healthy cereal alternative. This variation satiates for quite a while, contains many antioxidants and keeps blood sugar stable.

Breakfast substitute and other alternatives
Since some people find it difficult to eat in the morning due to time constraints or lack of appetite, the following alternatives are suggested: Eating a handful of nuts or putting them in a blender together with berries and some vegetables can prevent ravenous appetite attacks, which otherwise often occur in the morning or around noon. Those who already have very good stress management can also learn about intermittent fasting.

A simple form of this would be to eat nothing for 16 hours and then eat for the next 8 hours. This could be from 8 p.m. in the evening until 12 noon the next day. Fasting, as long as it is done consciously and without connection to stress, helps the body to repair cells by increasing gene expression. In addition, the body does not need energy for digestion during this time, which is a time-consuming process and can therefore concentrate on other metabolic processes9.

Practical suggestions for the perfect breakfast
After the physical reasons for a low carb breakfast described above, it should be mentioned that the principles of a Paleo diet have proven to be effective. Thus, potential allergens contained in cereals, legumes (including soya) and cow's milk products should not be on the breakfast schedule, as with other meals.