Immune system: how does our immune defence work? 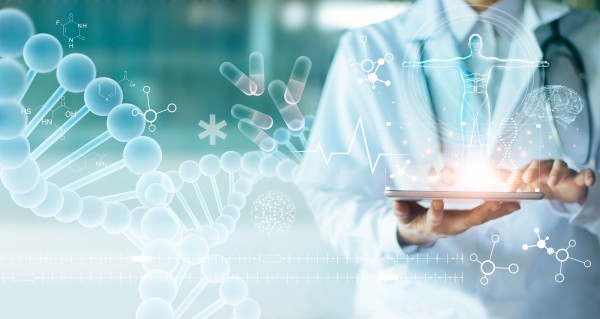 The last article described viruses and explained their effects on the human organism. This blog post deals with our immune system and how it keeps our body healthy. Some of these mechanisms are already given to us at birth, another part of the body's own defence system has to be learned by our organism. With the right lifestyle we can strengthen our immune system.

What exactly is the immune system?

Non-specific defence means all innate mechanisms that protect the body. As the word "unspecific" implies, it is a system that filters rather superficially and is not specialized for certain pathogens.

Chemical and mechanical barriers ensure that many potential pathogens cannot even enter our body. Our skin surface is both a mechanical barrier and a chemical one, as it has a natural acid mantle and is covered by microorganisms that repel foreign substances and organisms. It is similar with our mucous membranes.

With its low PH value, gastric acid ensures that potential pathogens that reach the digestive tract via food are destroyed. The tear fluid of our eyes contains lysozymes that can dissolve bacterial walls. The cilia in our airways trap larger particles from the environment (such as fine dust) and transport them back outside. Coughing and sneezing support this. Diarrhoea and vomiting are also defence mechanisms that transport undesirable substances out again1.

On a cellular level, it appears that we have white blood cells that are part of our immune system right from the start. They divide into different types, important for the immune system are the B-cells, which include the following subgroups: The scavenger cells remove residuals of bacteria and dead cells, like a crumb monster that eats disturbing crumbs. The T killer cells destroy infected cells so that they cannot infect others2.

From the biological perspective, we also speak of the humoral level, which refers to our bodily fluids. Proteins contained in them bind to potential pathogens and are activated. The mechanisms already mentioned, such as gastric juice, tear fluid and its enzymes or mucus from the airways are part of this. Inflammatory reactions are typical in order to fend off foreign substances. During an inflammation, the veins are dilated to make the tissue more permeable. In this way, the enzymes and proteins can mark the potential pathogens and attract the macrophages, which then eliminate the foreign substances.

The pathogens must then be detected in the lymphatic system according to the try and error system. This works in such a way that in the lymphatic organs and in the lymphatic streams many of the above mentioned white blood cells are floating around at any time. These T cells and B cells have special receptors, the antibodies, on their surface. These all have different structures, each of them waiting for an antigen of a pathogen to come and bind to them. This works on the lock and key principle. The receptors on the lymphocytes represent the lock and a key in the form of the pathogen floats around until it has found its lock and unlocks it or is bound to the respective defence cell.

Again, there is a cellular and a humoral level: viruses in particular attack body cells. The infected cells are then recognised on their surface by the immune system and destroyed by T-killer cells. Viruses, but also toxins and bacteria, are again of importance on the humoral level. The same key-lock principle is used in the blood and in the lymphs, only that these are slightly different cells. But even these cells have their antibodies on their surface. So in the end, intruders can be killed and eliminated by the scavenger cells as in the case of the unspecific defence2.

Immunity arises after an initial infection has been successfully combated

As soon as the immune system has identified which cell has the right antibody to bind to the pathogen, it starts to multiply this cell. With the help of the defence cell army that is created, the respective viruses or bacteria can be destroyed on a large scale. Smaller helper cells are also involved in this process, which subsequently develop into so-called memory cells. After fighting, these are our data memory, where an already known pathogen can be eliminated much faster in the case of a new infection. It is obvious that the process takes longer and longer with an initial infection and can therefore often lead to symptoms of disease. In the specific defence, one speaks of immunity when the body has set up this very memory and will not fall ill again if the same pathogen appears again2.

However, the whole thing is relatively complex and especially flu viruses often change a little bit, so that our body no longer recognizes the mutated virus and the process just described must be repeated.

Fever – an intelligent and important mechanism of our immune system

When our immune system is activated, our body uses energy to raise our temperature. When we are ill or feel symptoms, we often have a fever. This is often the case, especially with diseases caused by viruses. The increased temperature has a benefit for the immune system: although it usually does not kill off germs, it does accelerate the excretion of toxins that remain with the immune processes. Antipyretic drugs are therefore counterproductive, as they can hinder the work of the immune system. Of course, this must always be weighed up individually, because high fever temperatures such as 42⁰ C can be life-threatening, but there is usually no danger under 40⁰ C2.

Is our immune system strengthened by physical regeneration?

The most important thing that keeps us healthy is the balance between the activity of our sympathetic and parasympathetic nervous systems. If the body is in the sympathetic nervous system, it is ready to perform, focused and rather under tension. For this purpose, the corresponding hormones or neurotransmitters are released, which give the body the signals that it must prepare itself for active and rather strenuous tasks. In this state, for example, the digestion but also repair processes of the cells are reduced. These procedures are active again as soon as the body is in the relaxation and regeneration mode, namely in the parasympathetic nervous system. This allows the organs that release stress and activation hormones to recover and the organism focuses on the things that promote our health and replenish our memory3.

So it is obvious how important it is that we are regularly in this regeneration mode:
The actions of our immune system described above are mainly active in the parasympathetic state. However, if our body is constantly under stress, be it mentally or physically, many phases are missing in which precisely these processes can take place.

How can the parasympathetic nervous system be used to promote the immune system?

Our immune system consists of an innate and learned system. It can fight off pathogens and must sometimes activate inflammatory processes in the body and raise body temperature to eliminate invaders as efficiently as possible. We can actively support these processes through a healthy lifestyle by getting enough exercise, consuming the right foods and integrating conscious relaxation phases into our daily lives.

How do I strengthen my immune system?
Most important for an intact immune system are regeneration phases in which the body is in the so-called parasympathetic nervous system. The immune system is supported by a healthy intestine so that an intact intestinal mucosa prevents certain pathogens from entering the body at all. With short, intensive sports units, the body is then brought into a state of rest that allows the immune system to work optimally. Yoga, meditation, good sleep and learning how to come to rest are also helpful. With a healthy diet, general health and also the immune system is strengthened. The most common potential allergens such as cow's milk, gluten-containing cereals and soya, but also sugar can trigger chronic inflammation in us, which is why they should be avoided.
How does the immune system work?
On the one hand, there are chemical and mechanical barriers that ensure that many potential pathogens cannot even get inside us. These include the skin, mucous membranes and the intestinal wall. On the other hand, there are specific and non-specific defence mechanisms on the cellular level: The white blood cells are an important part of this system. They divide into different types, important for the immune system are the B-cells, which include the following subgroups: The scavenger cells remove residues of bacteria and dead cells, like a crumb monster that eats disturbing crumbs. The T-killer cells destroy infected cells so that they cannot infect others. Fever and inflammation also belong to the immune defence. They accelerate and promote processes that remove pathogens from the body faster and more effectively.
What is the definition of an immune system?
The immune system is the body's own defence system that prevents or hampers the entry of pathogens. It eliminates intruders, foreign cells, foreign substances, defective body cells (e.g. cancer cells) and virus-infected cells. The immune system is very complex and consists of different components and mechanisms.
What weakens the immune system?
Stress, unhealthy nutrition, too little exercise and a lack of certain nutrients weakens the immune system. Vitamin C and vitamin D3 as well as magnesium play an important role in the immune system, if they are missing, it could be weakened. Lack of sleep also has a negative effect on the functions of the immune system.
How can the immune system be supported in its regeneration after antibiotics?
Since antibiotics are primarily taken orally, they pass through the entire digestive tract. This imbalances the microbiome, which plays a decisive role in immune defence, because even good bacteria in the intestines are destroyed by the drugs. By taking probiotics, psyllium husks, digestive enzymes and intestine-promoting foods, the regeneration of the immune system in the intestine can be supported. Fermented foods like sauerkraut, kimchi and coconut kefir have a good effect on this. Bone broth and bitter substances are additionally helpful.
Corona virus covid covid-19 pandemic epidemic stayhome staysafe wash hands desinfectant immune immune system immune defence
Write a comment