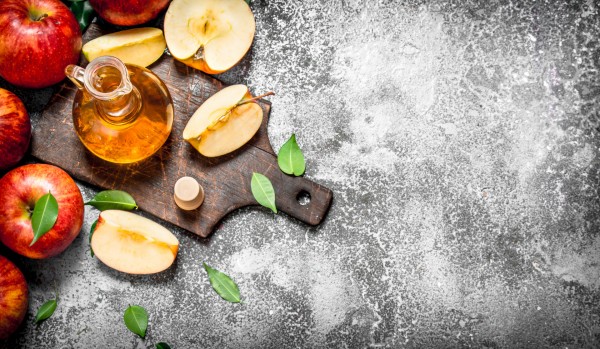 This is how the apple cider vinegar diet works

For the apple cider vinegar diet, as is often the case with diets, there are different ways of implementation. What they all have in common is that 2 tablespoons of apple cider vinegar are drunk mixed in a glass of water before each meal. The effect of apple cider vinegar is supposed to be fat-burning - even if you don't change your diet. Whether this works will be explored later in the text. In most cases, however, a low-fat mixed diet with lean meat, whole grain products, fresh fruit and vegetables is recommended in parallel anyway. Before all three main meals, then the quantity of apple cider vinegar mentioned is drunk. By this fat and calorie-reduced diet, in which one comes on only approximately 1200 calories, one is to decrease then approximately two kilos per week1.
In addition, there is an even more radical version of the method, in which one fasts for a few days and drinks only water and apple cider vinegar.

What is the physiological explanation behind the apple cider vinegar cure?

Most of the time, the background is explained in a relatively unspecific way, so that the average consumer is convinced without much questioning.

Basically, it is completely nonsensical that one food alone should have the total fat burner effect. It is not uncommon for marketing concepts to bring such myths into society to sell their products or guides. In any case, the physiological mechanisms of action mentioned cannot be proven in this way. It is simply an illusion that you can lose weight without making lasting changes to your diet by drinking an apple cider vinegar drink three times a day, popping a pill or eating a supposed miracle fruit.
Success in losing weight depends, on the one hand, on intestinal health and blood sugar stabilization as well as the associated hormone balance, and, on the other hand, of course, the calorie balance plays a role in the end. This brings us to the topic at hand because weight loss is only successful with apple cider vinegar diets in which calories are reduced or other healthy eating habits are adopted. Simply drinking apple cider vinegar before meals does not lead to the desired effect.

So, it is actually the extreme reduction of calories in the apple cider vinegar diet that leads to the rapid weight loss. Such crash diets are neither healthy nor sustainable because they are guaranteed to be followed by a yo-yo effect. Extreme low-fat diets in particular can also be dangerous and lead to nutrient deficiencies.
Calorie burning can only be increased by building up muscles through training and the right diet to make the calorie burning engine stronger, everything else is bullshit!

Constant blood sugar peaks lead to a disturbed insulin balance, i.e. the hormone balance is disturbed. This then leads to weight gain and many other metabolic problems. A stable blood sugar can therefore help with weight loss because without a constant blood sugar rollercoaster, there are no more constant cravings and less sugar is converted into fat and stored. However, the message should not be misunderstood: Apple cider vinegar will not be able to intercept blood sugar peaks that are too extreme - triggered by a mountain of sweets, wheat or sweet drinks. The acetic acid can, however, curb the blood sugar-raising effect of a lunch consisting of vegetables, rice and meat.

The conclusion on losing weight with apple cider vinegar