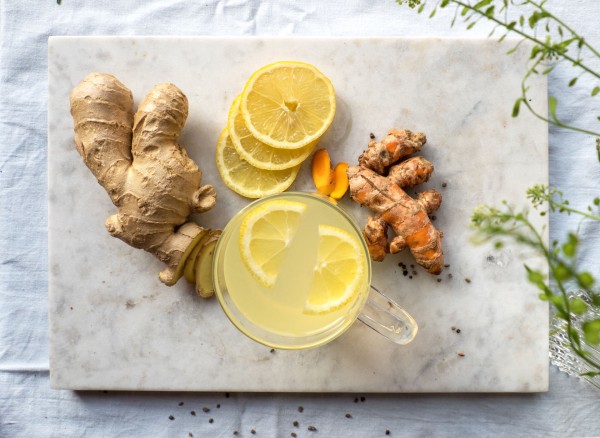 Inflammation in the body can have various causes and is basically not a bad thing. However, they always need a counterpart that inhibits inflammation. Anti-inflammatory foods are a simple and natural way to maintain the balance of inflammation and its relief. Unlike medicines, they have no harmful side effects on the liver, kidneys or hormonal system.

Inflammation in the body - this is what really happens

Before we get to the anti-inflammatory foods: Inflammation is a natural process in the body and should in no way be demonised: Inflammatory processes render pathogenic viruses, bacteria, but also foreign substances harmless and remove them from the body as waste. Inflammatory processes must also be triggered for the growth of muscles during sport: The muscle cells are strained beyond their limits during strength training, for example, causing small tears to form. This first triggers a brief inflammation so that all the little helpers such as enzymes, micronutrients and involved cells from the immune system are summoned. They then inhibit the triggered inflammation. This is the only way that the muscle cells can continue to exist and grow stronger.

Short-term inflammations are therefore important physiological processes that maintain or even improve our metabolism and health. However, it is important that the body is also able to inhibit inflammation. So it always needs two sides: the player and the opponent. The sympathetic nervous system, which also belongs to the catabolic (degrading) processes in the body, triggers the inflammations, so to speak. The parasympathetic nervous system, which is anabolic (building up), inhibits inflammation and allows us to grow and store. These are natural inflammatory responses. The two systems can be named for all the ongoing processes of the body. They also include various hormones that interact and everything else that happens to us. If the two systems are no longer in balance, inflammatory diseases can develop and an imbalance also arises mentally.

Especially chronic inflammations in the body can cause such an imbalance. Chronic means that the inflammations do not take place for a short period of time and are regularly inhibited again by the anti-inflammatory mechanisms, but that the inflammations persist in the long term. Nowadays, this condition is not uncommon, as many people can no longer mentally cope with external stress factors and this initially creates chronic mental stress, which has a direct effect on chronic physiological stress. In addition, an unhealthy, pro-inflammatory diet - consisting of too many omega-6 fatty acids, industrially processed foods, sugar, and allergens such as gluten and cow's milk - lead to chronic inflammation.

However, this problem can be counteracted preventively and actively, part of which can be solved with anti-inflammatory foods:

Anti-inflammatory foods - here's how nutrition can support you

Basically, chronic inflammation in the intestine should be avoided through the right diet. Leaky gut syndrome in particular is one of the inflammatory diseases that negatively stress the balance of inflammation and anti-inflammation. To keep the intestinal mucosa intact, maintain the balance of the microbiome and avoid chronic inflammation in the mouth and intestines, first of all avoiding pro-inflammatory foods is a good prophylaxis. Inflammatory foods include sugar, gluten-containing grains (wheat, rye, barley, etc.), cow's milk products (cheese, yoghurt, milk, curd, etc.), legumes (lentils, beans, soy, etc.) and industrially processed foods - especially those high in omega-6 fatty acids or trans fats/hydrogenated fats.

The counterpart of omega-6 fatty acids is omega-3. Omega-6 (found in sunflower oil, safflower oil, corn oil, pumpkin seed oil) promotes inflammation in the body. This is not bad in and of itself, as mentioned above because short-term inflammation is important. However, the ratio of omega-6 and omega-3 fatty acids in our diet today is problematic. Omega-3 (fish oil, rapeseed oil, linseed oil, etc.) is anti-inflammatory and should be in the diet in a ratio of 1:5 (one part omega-3 to 5 parts omega-6) with omega-6 fats. Unfortunately, the classic diet today tends to have a 1:20 ratio, so four times as many pro-inflammatory fats are consumed than should be the case. This imbalance can lead to chronic inflammatory reactions due to the lack of material or anti-inflammatory foods.

What else helps against inflammation in the body?

Besides omega-3 fatty acids, there are many other anti-inflammatory foods:

Natural fats and oils such as virgin coconut oil or pasture butter support the intestines and cell walls. Organic eggs contain numerous vitamins such as A, D, E, K and B vitamins and are high in omega-3 fatty acids. On the other hand, despite outdated myths, the cholesterol it contains is good and important for hormone formation - primarily to protect the cell walls. Eggs should therefore definitely be on the menu for an anti-inflammatory diet.

Bone broth from pasture-raised cattle or organic chicken is extremely anti-inflammatory. The amino acids it contains, which include the protein collagen, support the skin, mucous membrane and soft tissue. On the one hand, bone broth acts as an anti-inflammatory in the mucous membranes of the mouth and intestines, so that fewer toxins enter the circulation. On the other hand, other centres of inflammation inside the body can be alleviated. Especially in case of injuries to bones, soft tissue or in the joints, this therefore supports as anti-inflammatory food.

Basically, most vegetables have an anti-inflammatory and alkaline effect. Broccoli in particular can be mentioned in this context. However, it is also the case that vegetables sometimes contain anti-nutrients that, like legumes, can inhibit digestive enzymes. However, this is very individual and depends on the very complex, different microbiome of each person.

Berries, being a low-sugar fruit, can score high in anti-inflammatory properties. Other fruits also have the potential to do so, but their unfolding depends on the fructose tolerance of the individual. Juices are not a good idea here, as they lead to a rapid increase in blood sugar levels.

Anti-inflammatory drinks also show their effect: Tea against inflammation in the body is a well-tried remedy: Fresh ginger-lemon tea is definitely high on the list of anti-inflammatory teas. The vitamin C of the lemon and the pungent substances of the ginger help to eliminate pathogenic bacteria, predominantly in the mouth, intestines, and throat. Fresh turmeric tea is also one of the teas that can soothe an inflammatory reaction. That honey in tea works wonders is more of a myth because the dissolved sugar is rapidly absorbed into the bloodstream, causing a blood sugar spike. This in turn triggers an inflammatory process in the cells. The vitamins contained in a tablespoon of honey are the same as those contained in two blueberries, which would be preferable to honey because they contain hardly any sugar and have other antioxidants in them.

Many herbs also count as anti-inflammatory foods. Basil, dandelion, devil's claw, ginkgo, parsley, thyme, mint, rosemary and sage can all be used in an anti-inflammatory diet. They can either be used directly in recipes or prepared as teas or even used as concentrated herbal extracts.

As mentioned above, ginger and turmeric, again as a spice, are super helpers to support an anti-inflammatory diet. They are available as powders, but can also be used fresh as spices. Chilli and pepper, or the capsaicin they contain, are also considered anti-inflammatories.

Is coffee pro-inflammatory or not?

Coffee has a stimulating effect, i.e., more in the sympathetic nervous system. This makes it more of a pro-inflammatory food. However, due to the release of happy hormones, this is not necessarily a bad thing. Coffee should only be used during the active part of the day, i.e. in the morning and at midday. Due to its half-life, drinking coffee too late can have a negative effect on sleep and thus on the anti-inflammatory parasympathetic nervous system. So timing is crucial. Coffee also contains antioxidant substances that can positively support the body.

Anti-inflammatory foods include omega-3 fatty acids found in fish, flaxseed (and linseed oil) and canola oil. Other good, native oils and fats such as coconut oil or hemp oil can also have an anti-inflammatory effect in the body. Bone broth, vegetables, and fruits counteract pro-inflammatory foods. Teas made from ginger, turmeric, mint, chamomile, sea buckthorn, lavender, fennel, anise, or lime blossom also have an anti-inflammatory effect in the body. In addition, herbs such as basil, dandelion, devil's claw, ginkgo, parsley, thyme, mint, rosemary, and sage can help the body to inhibit inflammation. On the one hand, this happens actively, through the anti-inflammatory effect of the ingredients, and on the other hand, through further processes, as the calming substances in these plants support sleep and the general resting state of the parasympathetic nervous system.